Lying naked in the heat
Dabbing sand into my pores
With sun speckled finger tips
I let the ocean breeze fill me up
My lungs breathing salty mist
Onto the last of the land beneath my cheek
And with a lingering sigh of pleasure
I am dragged mercifully back,
Back into the foam and the froth
Back into a warm embrace
Then I am spat back to where I belong
The earth's saliva drenching my body
Stones bruising my skin
Back to stand on my feet
Back to walk without constraint
And the hurricane pushes me on
The salt laced rain knotting my hair
With weeds and tiny debris
Other things which no longer belong
And it is upon me to carry us all away.
Posted by Star_Girl at 06:52 1 comment:

Gulls perched on slick rocks,
(Too slick for human soles)
Gusted by the coastal wind.
Some more intrepid than others
ride the occasional piece of driftwood, carried in from an unknown boat,
long passed by.
The planks are battered
and often black with rot,
Though flecks of paint remain in patches.
And what do such things matter to a Gull?
A resting spot is a resting spot
As long as the tide behaves.
Posted by Star_Girl at 07:43 No comments:

This is an example of what I call an 'emotive query story'. It is addressed to the reader in the form of an unstructured note because that is what the story is: an unstructured blurb designed to elicit an emotive response, normally through morbid or wrenching plot detail without giving the reader any clear idea as to the purpose. Ian McEwan is a writer who frequently uses this technique and I thought I would try my hand at it.


Hello. I am please to say that you have embarked on nothing strenuous or taxing here. This will not take up much of your time and soon you will most likely have forgotten this little passage and be moving on. You are here and I am no longer here and that is the extent of our connection.
I want you to embrace it because these words are not a 'connection' between us. You may think of them from time to time throughout the rest of what I hope will be a long and happy life, but you are not in anyway connected to me through these words.
This is important because what you are about to read is unlike anything else I will ever write and thus any connection to my being you fool yourself into believing in will be a hollowed out rut of earth in comparison to any true human emotive involvement with another. This text does not reflect who I am, it is merely what I was choosing to say, at a time long before you stumbled across this.

It was in a summer month, I forget which one, after all there are several and all much alike in a town where no seasonal food is grown. I was crossing the road that cuts through the centre of town, waiting patiently for the coach full of day-trippers to trundle past, when I saw a child of no more than six years old dart into the road. His father let out a bark of warning and the little boy stopped, leaving the coach just enough room to swerve around him. The mother gabbed the boy and slapped him several times, although not very hard and everyone at the road side waiting to cross was so fixated on the scene of a near disaster-turned into domestic banality; that they failed to notice the coach stopping and all of the passengers exiting very quickly. I only happened to be watching the coach because I had seen the drivers face as she swerved to avoid the child.
She had looked disappointed.

What followed was something that the papers described as 'a freak accident' and 'an unexplainable tragedy'.
Personally, I don't think anyone knew what to say about the coach woman.She was killed instantly on impact, the children and the mothers and the fathers and the friend, who had been milling around had all managed to get out of the way in time, and the cashiers working behind the inches of brick and steel of the bank walls suffered no worse than a little shock at the noise of impact. It was just her.

What I have never told anyone is this: I ran forward and held the drivers hand while the other people screamed or fled. I wrapped my fingers around hers, ignoring the blood that dripped from her nose, sticking our hands together lightly. I stayed with her like that because in the seconds that had passed before the moment the bus hit the wall, I knew there was a human in a lot of pain trapped inside that metal box.

I do not know her name, I refused to read beyond the tacky headlines, and in my mind I simply call her Annie. Annie let those people out of the vehicle because she knew what she was going to do, that I am certain of, but beyond that I have no clue as to who she was or why she did what she did.
We had no connection, and she was dead the first and only time I touched her.

•Sweating on upper lip
•Shaking hands
•Muscles twitching in arms and legs
•Nausea
•Oesophagus contracting rapidly
•Bowels clenching
•Dizziness
•Clammy Mouth
This is how my body tells me I am afraid.
Posted by Star_Girl at 08:39 No comments:

I am a woman.
It is complexity of gender
Which makes me state emphatically
This most simple of facts.
I am a free woman.
I take a pill to control my body,
To keep it free,
To stop any man owning me for longer
Than the span of his pleasure.
I am a young woman.
I am careless if not carefree
I have no lines across my face
I have the future,
No matter how brief or long
To dwell on.
I am a person.
Of nature unspecified,
Of love undersigned
Of consideration given and taken.
Posted by Star_Girl at 09:53 1 comment:

A suspect smear on speckled lino
Could be mud, chocolate or spilt espresso
Could be a flaw in the cheap design
But ....
No.
For a moment as I sit and stare
At the litter tray over there
It would be so easy to ignore.
But ....
No.
Gloves on for closer inspection,
Breath held tight in anticipation
Eyes squinting to enhance perception
Sleeves rolled up to avoid contamination
And ....
Is it .... ?
Wait .... !
No!!!!
But ....
Yes.
Cat Shit.
Posted by Star_Girl at 02:34 No comments:

Chapter 1 of a piece I have yet to name.

”I started walking, still blinded, but my feet found their path, and my eyes adjusted to the light, greens and browns swimming into focus until I saw the trees ahead of me and then I was there. The gate scraped shut behind me and, I know it sounds stupid to say it, but the sunlight on this side of the gate felt warmer somehow. It is almost definitely my imagination but I still wonder sometimes, in my more whimsical moments, maybe the sun … maybe she really did shine a little brighter for me that day, welcoming back to the land she touches freely, without long shadow of bars and chains; encouraging me to get away from that place, to circle the earth, just as the earth circles her.
Posted by Star_Girl at 09:30 No comments: 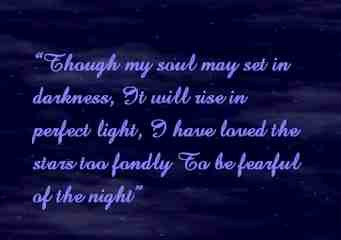